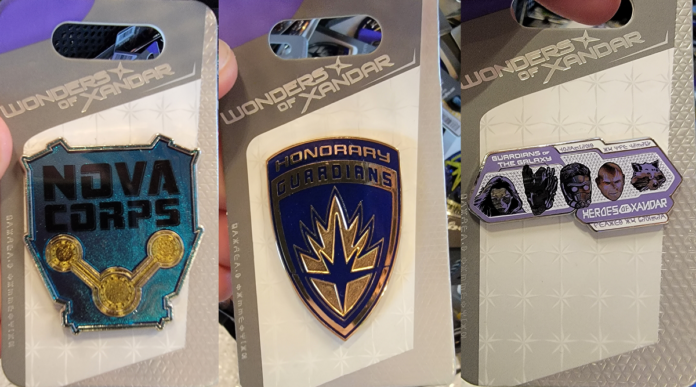 For the opening of Cosmic Rewind, Disney World’s newest attraction, the parks dropped an astounding amount of new merchandise. Usually for new rides we got maybe 10 new pieces of merch that can fit into a small corner of a shop but not this time. Instead we received what amounts do a whole store of merchandise which makes sense because Disney also opened a new store dedicated to Cosmic Rewind. This isn’t a review of that store which will come later, but instead this is a review of a lot of the new merchandise that they added to the Creations shop.

Up first are some fun pins! From what we could see there was a total of 6 new pins that came out for the grand opening. I’m partial to the Guardians of the Galaxy logo pin with the 5 different colors as that definitely pops! In second place I’d probably have to say the ‘Honorary Guardians’ pin is pretty good because it plays off a joke from inside the ride. It’s kind of funny but I don’t want to spoiler anything for those that havn’t been on the ride yet. Just keep your ears open at the end of the ride 😀

Up next is probably going to be the most popular item of the new line of merchandise, a Loki headband. Be warned though, this thing can be uncomfortable to wear! It is also rather heavy so I doubt guests would wear it all day and instead just awkwardly carry it around by their side throughout the day.

These things are cheap however, at $39.99 these are definitely affordable to a large amount of guests in the park unlike some of the Star Wars merch like the legacy lightsabers series which can run guests up a couple hundred dollars per item.

Want to drink from a Loki goblet? You can! This cool mug was only $29.99 and pretty dang cool.

A Loki spirit jersey that I wasn’t really feeling. If you like it, definitely dont let my opinions stop you from getting it!

I thought this new sweater was interesting. It shows off 4 villains on the right hand side and ranks their power levels. I didn’t see that part originally and was very curious as to why they would include Taskmaster in the same graphic as Thanos or Ronan. However, with the power scale graph in place, the placement of Taskmaster definitely makes sense now.

Yes this is a dancing Groot although I’m not too much of a fan with how Groot turned out. It definitely looks a little too plastic for my liking.

There was actually a ton more merch that we’ll cover in a video later on. If we included every single piece of merch in the blog article, it would probably be 18 pages in length and wouldn’t load properly due to the sheer amount of images included! Stay tuned for our youtube video when we post it!