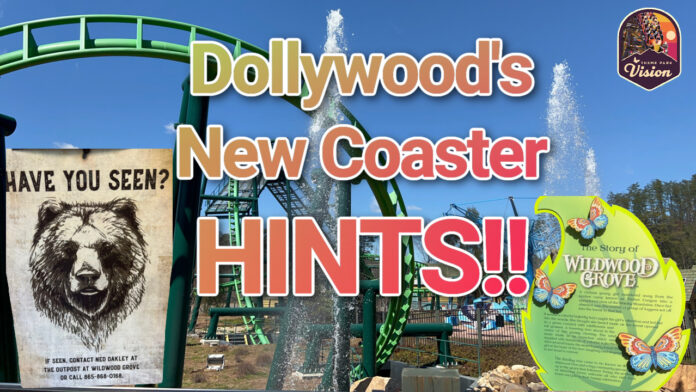 Everything We Know So Far About The New Dollywood Rollercoaster

If you want to avoid spoilers for the ride, you probably should stop reading this article. We’re going to go over what we know so far of this new coaster.

In case you were not aware, Dollywood is building something. Rumor has been that it’s going to be a new coaster and some images have come out online supporting it. But recently Dollywood has released a teaser poster of the new attraction.

If you call the number at the bottom 865-868-0168, you get an automatic recording. The audio loops multiple times so you can easily hear everything the person says.

Here is the full chat transcript of the call:

This is Ned Oakly
I’ve set up this hotline to gather tips about an especially big bear
I’m guessing you’ve got some information since you’ve called this number
I’ve been hearing stories about this bear roaming these hills and hollers for years
Those that have seen it have sweared its the largest bear they’ve ever seen
these are mountain folk who are accustomed to bears
others don’t believe it , they say big bear is just an old wives tale
That may be so but I’m on the lookout to prove once and for all that big bear is real
and this right here in wildwood grove
I’m planning excursions to go searching for big bear starting next spring
If you want to come and help me look, if you’ve seen big bear, have some information, or better yet some evidence related to his whereabouts
see me at the adventure outpost basecamp In wildwood grove
Things are going to get big

Our guess is that the new coaster will probably be called ‘Big Bear’ or something with the word ‘Bear’ in the name. It would be the perfect name for a new attraction at the park as it fits with the smoky mountain vibes. The new coaster will reportedly be the “largest single attraction investment in the history of Dollywood” according to park management. To put that into perspective, the previous most expensive attraction at the park cost a whopping $22 million, Lightning Rod. It will sit on a 20 acre site and will be a ‘family attraction’. What does a family attraction mean in this case? Does it mean a moderator coaster with lots of theming? We can hope so. There has been a large push for moderate coasters recently with a ton of theming. Cosmic Rewind at Epcot is the most recent example of this and before that was Hagrids Magical Moterbike Adventures at Universal Orlando. These coasters arn’t the most intense but they are some of the funnest coasters out there that adults and family members can both enjoy equally. You don’t need an intense coaster to appeal to adults if there is a great story behind a ride.

User DJO_1988 made a pretty good rendering of some leaked plans of the ride that we’ll link to here in case you wanted to see what the blueprint of the ride might look like. It does appear to be in the new wildgrove area of the park and looks quite fun! This might not be what the end result will look like but it can give us an idea of what they had in mind for the coaster.

The announcement for the new ride will be this Friday, August 5th. We’ll be sure to cover what comes from the press conference afterwards! Stay Tuned!