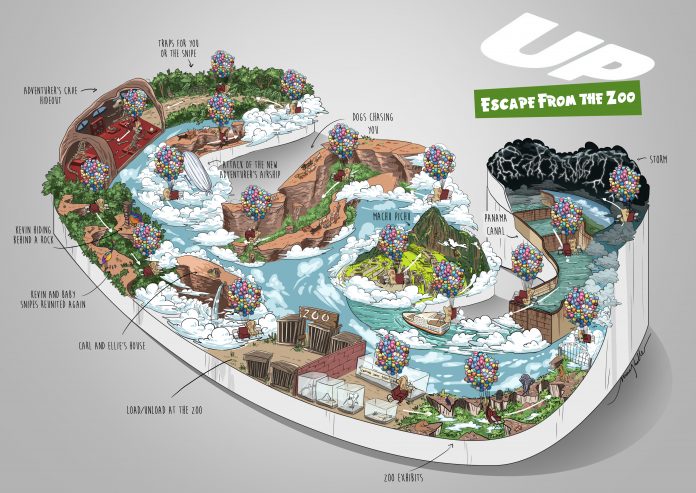 Here’s what an UP ride could look like if we had our way! Up: Escape From The Zoo Ride

I wanted to create a new concept ride and put it up to a vote on our social media platforms and Patreon on what you guys wanted to see most. It was pretty clear. Everyone wanted a ride made from the UP movie that Pixar made. One of our earlier concept rides based around Coco received a lot of praise and we wanted to create something similar.

So I set to work on creating this ride. It took longer than I wanted it to because life gets in the way but I think the final concept art turned out amazing. Keep reading for the full story of our ride! Below you can see the poster I made for the ride. Head on over to our Facebook page to see how it looks in 3D and be sure to ‘like’ it so I can continue to make this really cool artwork for you.

The ride starts out in the queue with essential information for guests before they board the ride. In the queue, there are fake newspapers, advertisements, and fake tv ads about the newest attraction coming to the zoo. It seems that there is a new adventurer set on capturing a snipe. His name is Sir Arthur Grant and he’s using a similar method of traveling as Charles Muntz, an airship and travel companion dogs. He is bent on recreating the good old days of being an adventurer and finding the unknown. Wanting to recreate the trips that Charles took in his life, he set about on his journey to South America.

It was on this journey that he and his dogs got lucky and they managed to capture two baby snipes. He immediately brought them to the zoo and then traveled back to South America in hopes of finding more snipes and additional riches. The queue is full of advertisements about the upcoming baby snipes exhibit, newspaper articles about his amazing discovery, and more snippets of information. Apparently the baby snipes were resting on two chairs randomly left in the wilderness, one short red chair and one high backed yellow chair. These chairs were brought to the zoo to be displayed next to the exhibit on why littering is bad. The queue runs along a brick wall and on the other side you can hear Carl and Russel occasionally complaining about breaking into the baby snipe exhibit. Carl complains he’s too old for this and Russel urges him on that they have to help out Kevin get his babies back.

You board the ride in the backstage area of the zoo. The ride vehicles are 4 chairs strapped together. Carl and Ellie’s chairs which were brought to the zoo by Sir Arthur Grant along with two random foldable chairs. The ride vehicle definitely looks like it was fashioned on a shoe string budget and maybe with a few shoestrings!

After you exit the backstage of the zoo, you fly over the rest of the zoo! You’ll see where the baby snipes were about to be displayed along with some other animals of the zoo: Toucans, elephants, monkeys, and more! With your help, you can bring the baby snipes back home to Kevin!

The next section will be a large near vertical climb in the ride vehicle as you start your journey back to Kevin. The journey appears calm at first but then a wild storm hits you! Lightning bolts and wind rustle the ride vehicle as it continues its journey.

You quickly try and get out of the storm but find yourself in the Panama Canal! Flying between the locks, you can feel the shear size of the walls around you. There is water underneath you that occasionally splashes up against the side of the canal.

You go through another cloud bank in the canal and narrowly avoid dodging a huge ship! You can see all the details of the ship as you narrowly fly over it.

You come out of the cloud bank and find yourself over some ancient city. It’s Machu Picchu! Guests will soar around this ancient city on top of a mountain. They’ll see miniature buildings far below them similar to the London scene in the Peter Pan ride.

You journey once more through the clouds and come out of them in a familiar place. With cliffs coming out of the fog banks all around you, you know that you’re near Kevin’s home. But wait,you hear the barking of dogs. All of a sudden you’re being chased by the dogs. It appears that you’ve run into Sir Arthur Grant and his dogs! You narrowly dodge cliffs with dogs chasing after your heels the whole time.

You quickly try to fly through the clouds to lose the dogs but find yourself face to face with Sir Arthur Grant and his airship! It seems very familiar to the one that Charles tried to use against you. It flies along side of you and Sir Arthur is trying his best to hit your balloons with a shotgun. He can’t let you get away with his prize! His goal is obviously not just to recreate the trips of Charles but to become more famous than him by doing what he could not!

There’s another small chase scene as the dogs are still chasing you and they are followed by Sir Arthur.

You once again journey through clouds and find yourself near to the ground. Journeying between the trees, you are still being chased by the dogs and Sir Arthur. You manage to get them trapped in some of their own traps though that they had set up for other snipes!

Next up, the ride vehicle takes you through a cave – but wait – this isn’t an ordinary cave. This is where you had pushed out all the bones that were once on Charles’ airship when you took it over. The cave is in disarray and hasn’t been visited in quite some time.

Once again you find yourself flying through the trees and there is a hidden easter egg on the side. Kevin is hiding behind some rocks like he was in the movie. Guests only have a quick second or two to catch this glimpse of him before they are once again in the trees.

At long last, you’ve found Kevin and reunited his two missing children with him and the rest of their family! He squawks happily at you and his children and rustles his feathers in joy. If you look closely, you can see the walker that Kevin ate from the movie along with a tennis ball that one of the baby snipes stole from Carl as well.

As you fly away from Kevin and the baby snipes, you come across one last feature of the ride, Carl and Ellie’s house. It’s a distant object on the cliffs. Forced perspective is used and it’s just a tiny miniature model way up high by Paradise Falls.

And that was my Up ride concept idea! If you want to vote on the next ride concept I make, head on over to the Parkineer Patreon account by Clicking Here. For just $1 a month, you can help me come up with new concept art. Also, subscribe to me on YouTube by Clicking Here, your subscription helps us continue to bring you to theme parks around the world and ones that we create out of thin air. Head on over to our Facebook group where we’re talking about this ride idea and other ones!

If you liked this, go and check out our Coco Ride Concept Idea!

This ride is just a concept ride we made for fun and is in no way rumored to being worked on. Please do not use these images without our permission.

Disney and Pixar had no hand in making of these images and do not endorse the ride idea in any way.