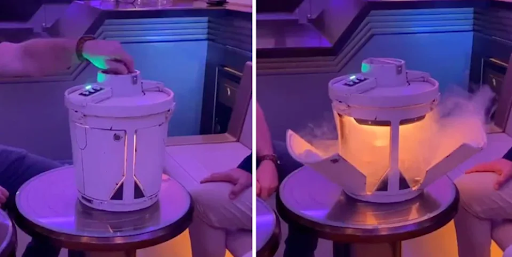 Disney recently launched a brand new drink on board their newest cruise ship, the Disney Wish. The new cruise ship has some amazing amenities to it, but one that Star Wars fans might love to visit is the Hyperspace Lounge. This is a bar/cocktail lounge themed to Star Wars.

One of the drinks you can snag at the lounge is called the Kaiburr Crystal and it costs $5,000. I didn’t accidentally add an extra zero or two to that, it really does cost $5,000. But, before you think this is just an overpriced bottle like served at ‘clubs’ you should read what else the drink comes with. And believe me, while it’s pricey, it is worth it!

So first off, let’s go over what’s actually in the drink

It actually comes with multiple drinks inside of a camtono, a device we’ve seen in the Star Wars universe. It was recently featured in the Mandalorian to hold Beskar. The cocktail inside the camtono is made from Camus Cognac 4.16, Yuzu and kumquat, and Grand Mariner Quintessence.

It also comes with three shots which are comprised of the following:

You also get to keep all 4 cups that the drinks are served with. But sadly you don’t get to keep the camtono. 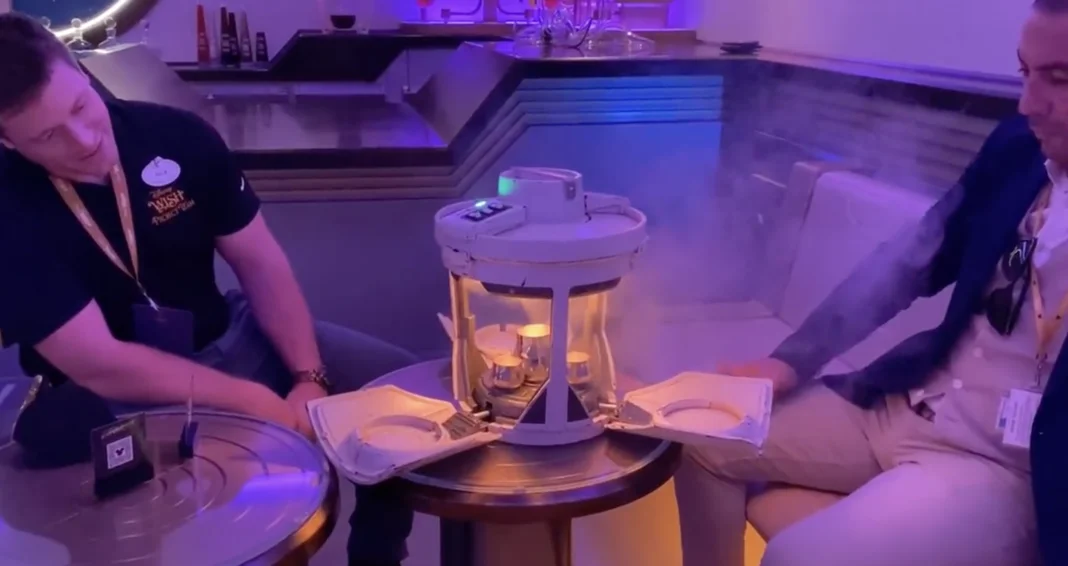 Now here’s where it gets good, the price of this drink doesn’t just include the drinks. It also includes a special themed escort off the ship. What does that mean? We don’t know yet but maybe you’re escorted off the ship by storm troopers or carried down the ramp by Chewbacca?

You’ll also receive a bottle of sparkling wine from the Skywalker Ranch. This will be delivered to the guest room later

The last thing that is included in the price of the drink is a ticket for one to visit the fabled Skywalker Ranch. Located roughly 40 minutes north of San Francisco, California, this is the ranch where George Lucas made some of the Star Wars films. There’s a currently operating design facility on the property that you might be able to visit, although that isn’t confirmed. This part of the offer is kind of a big deal. The ranch isn’t open to the public. So unless you know someone or are super duper rich, you most likely arn’t going to be able to visit it. For diehard Star Wars fans, this is probably the most interesting part of the $5000 price tag.

While the price of the drink is very expensive, I would argue you get a ton of value out of it. Compared to a lot of other extravagant drinks that clubs or bars serve(gold infused vodka, 500 year old whiskey, etc) this drink seems well worth it. How many people will actually get this? Probably not that many. Just like the Galactic Starcruiser hotel, probably only diehard Star Wars fans will purchase it. If I visit the Disney Wish, you bet I’ll be purchasing this drink and will report back!