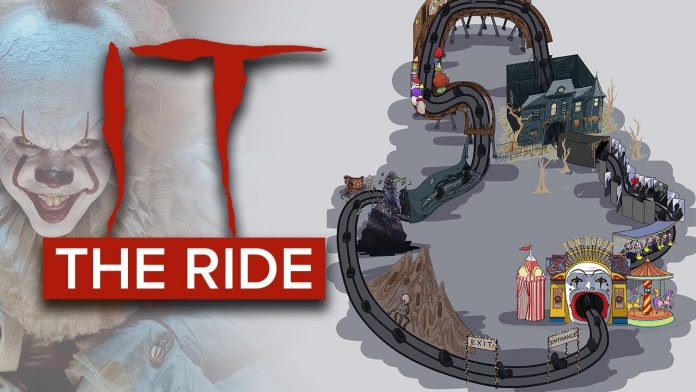 I created this as part of our parkineering, where we create concept rides just for fun. This is in no way official or even rumored to happen. This is just a cool concept ride I made. Horror needs more representation at theme parks, kind of like how Stranger Things is finding it’s way in more Universal Parks.

I’ve been wanting for awhile now to create a dark ride for adults. Finding the right intellectual property for a dark ride geared toward adults wasn’t too hard as IT Chapter 2 had just come out. In my mind this dark ride based on IT would have to use the same ride technology as the Haunted Mansion found at various Disney parks around the world. Imagine a version of the Haunted Mansion but themed around Pennywise the Dancing Clown.

So where would this ride go? Which theme park would this attraction fit well with? Cedar Fair and Six Flags don’t really build dark rides so they are out of the mix. Disney wouldn’t be interested in this ride. I think they learned their lesson from Alien Encounter Extra Terrorestrial.

So where does that leave us? Universal Studios. They are the only other large theme park chain that could pull off something like this. They have a history of working together on properties owned by Warner Brothers (Harry Potter) so this would be just another project for the two companies.

Guests would board their doom buggy style vehicles starting at the carnival from the second movie. This entrance would be a grand carnival full of vibrant colors, and various rides/stands that one might find at a carnival. And of course, there will be balloons. Everyone loves balloons. Creepy carnival music will be playing in the background. Guests will enter the giant clown mouth that marks the start of the fun house.

The next room will have the ride vehicles dodge florescent swinging clown dummies. There will be some close calls as guests narrowly avoid the clowns. The music starts to get creepier and slower as they travel through this not so fun house.

Up next is the mirror maze section of the fun houses. This will be the first area of the ride that will show this was made for a mature audience. This is no kiddie ride. Guests will enter the maze of mirrors and catch occasional glimpses of Pennywise through the mirrors. There will be a large blood splat effect on one of the mirrors from when Pennywise kills Dean the child in front of Bill from the second movie. There is no more pretense that this is a kiddie ride as Pennywise’s voice starts to be heard more starting from here. You catch occasional dialogue from him “Hello”, “Hiya Georgie”, and his maniacal laughter. Is this journey over yet or has it just begun?

Guests move on through a dark hallway where one’s imagination can start playing the strangest mind games. Left to your own devices you can imagine a hand reaching out to you from every nook and cranny. This tunnel opens up into a large showroom scene where they are greeted by the Niebolt house. This would be a massive three story room where one can get the full scale of this house and it’s surroundings. There’s a dead old tree outside and a decrepit iron fence. The grass has been dead for a very long time just like this house. The track leads through the entrance of the house – but wait -was that a red balloon that just floated past one of the upstairs windows? The iconic creepy sound effect from the movie starts slowly building up as you start to enter the house.

After entering the house, you start to realize that no one has been here in quite awhile. There are cobwebs everywhere, dust covers all the surfaces, and it smells stale. There’s a stairway up ahead where the ride vehicle tracks lead.

Here we have the ride vehicles wandering through the upstairs floor of the Niebolt house. Something isn’t right about it. You see a balloons shadow as you travel through the first part of it. That piece of furniture with the bed sheet covering it kind of looks like Pennywise in shape. The portraits on the wall all seem to be of Pennywise and one of them just blinked! A door shuts heavily up ahead and you’re now entering a clown room. There are clowns of every shape and size in this area. There would be various animatronics of Pennywise in this section that would be set up to randomly pop up. This would ensure that every ride experience would be different as guests wouldn’t know when the scare would happen. There is a hole up ahead that leads from the second story through the basement and to the sewer system. There’s no turning back – the only way is forward.

You find yourself in the sewer system now of Derry. This is a very wet place as water trickles by you on the side. There seems to be pieces of trash floating in the water as you journey by. Pipes flow in to the sewer system from all sides. Some of these pipes don’t have anything, some drip steadily, and one or two gush out water. You pass by a pipe and catch a glimpse of eyes looking back at you. You hear Pennywise say from one of these pipes “You’ll float too”.

You’re at the crossroads of the sewer system now. This is where all the pipes meet. It’s a massive cavern over three stories tall. There is a towering pile of rubbish in the center of this room. Around it and moving slowly are a mix of children, adults, and debris. The air is stale and grimy. Up ahead you can see Pennwise and his wagon. He’s happy your down here and getting ready to float with the others. He’s dancing for you, but you don’t seem to take comfort in that.

As you travel on through this massive sewer section the area around you starts to change. You’re back to the final scene from IT Chapter 2. The rubbish pile has transformed to weird jagged rocks, like a meteor hit the ground. There are voices that grow louder and louder shouting things like ‘If you believe it does’, ‘You’re a mimic’, ‘A dumb clown’, ‘A stupid mummy’, and more. You pass a corner and see that Pennywise is no longer strong and full of evil energy. He seems to have melted into the ground and is almost begging for you to stop. As you pass by him you hear him say “You’re all grown up”.

So that was our IT ride concept. I hope it made you float in excitement!

In case you havn’t read it yet, we’ve made an amazing COCO concept as well that you should check out. Have an idea of your own? Comment on our youtube video of this ride your unique idea. Also, you can vote for our next concept ride we make. It’s going to be either an UP ride or one based on Emperor’s New Groove. If you want to help support us in making future concept art like this, head over to our Patreon account where you can donate and get cool monthly products like magnets, pins, and more!

This concept ride is in no way real or endorsed by Universal Studios or Warner Brothers in any way.