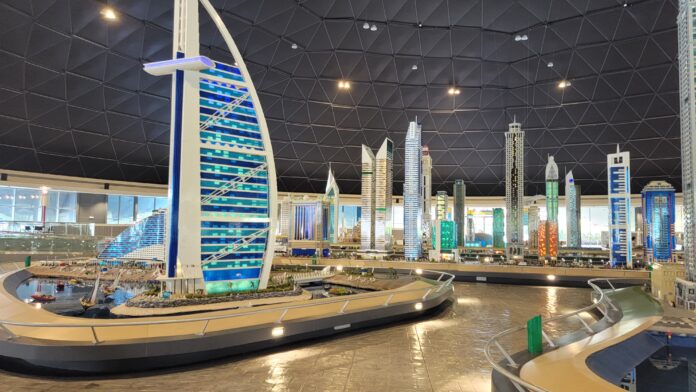 A review of Legoland Dubai

Legoland Dubai marked the first day of our vacation in Dubai. We got up early to try and be at the park gates right when they opened in case there was a crowd, there was no crowds to get into the park. Our park tickets were free because of our hotel stay at the park hotel, Lapita, which gives you free park tickets to the 3 nearby parks each day of your stay.

As usual of some other parks, Legoland Dubai had some employees outside the gates trying to take your pictures or selling you a refillable bottle. We wish we had bought the refillable bottle as it would have been amazing to have. The whole day was so hot in the desert heat and we ended up buying a slightly more expensive slushee refillable cup. If we had to choses though, we wish we wouldve gone with the generic water/soda refillable cup.

The employee at the entrance scanned the paperwork the hotel gave us for the park and we were on our way. The first building we went to was actually the main connecting structure for the whole park. Think of it as the the main circle in front of a Disney castle. This was the hub and spoke of the park. From this structure, Miniland, you could reach each of the different themed lands of the park.

If we were worried about crowds, we probably would have darted directly to do as many rides as we could before the lines got long. But, there was clearly hardly anyone here so we definitely took a leisurely stroll through the land. To fully experience all these lego buildings, you should probably plan on at least an hour inside this building. Everything was so impressive inside of here.

The scale of these buildings was awe inspiring. It definitely left me with the strong desire to build my own lego skyscraper inside my house(maybe I take that leap sometime in the future??). This place was a huge collection of all the buildings you might see in the United Arab Emirates. My favorite was probably the airport which was huge! We’ll have more on all these future lego buildings in a future article, breaking down each one with individual pictures and information.

After this we exited towards the right, deciding to go to their city themed land. There was three rides in this land we were able to do. The Boating School(pictured below), City Airport, and Rescue Academy. We’ll start with the boating school first. This was the longest line of the day for us(about 15 minutes) but mostly because they were adding boats to the ride. There was also two instances where a boat was stuck and an employee had to physically walk out to the boat in waders, to free the boats. These employees were definitely working quite hard in the heat and I hope they received plenty of water and breaks. The boating school ride itself was fun. We learned that it was easier to steer the boat with shifting our weight in the boat than actually trying to steer, so that made the ride a little funner. The boat route circled around a play structure in the middle that kids could enjoy if they wanted to. There was a good amount of fun objects made out of legos throughout the ride.

Next, we did the fire academy ride. This one was quite the workout. Guests have to board a fire truck and use push power on a bar inside the vehicle to move it forward. After reaching the buildings on ‘fire’ at the end, guests would then disembark and use even more physical force to pump water and ‘extinguish’ the flames. Finally, after putting out the ‘fires’ you would have to use your strength to get the firetruck back to the other side. The whole time you’re trying to race other guests to figure out who was the fastest party to win the race. Overall, I would recommend this ride for those who are physically able to do it and to only do it during the early morning or evening when it is coolest.

The other ride in the land we did was City airport which was a smaller version of Dumbo. While a good ride, this one could probably be skipped if push came to shove. However, because it was a walk on we decided to do it.

Sadly, we tried to do their driving school but were told we were too big to do it. They had two versions of the ride, one distinctly made for super small children. Because of that, we totally thought that the other one would be adult friendly but that was not the case. This ride really looked cool and we wish we couldve done it. If you have a kid, this should definitely be on your ‘must do’ list for the day.

The restaurant in the City section was closed when we visited the park and there was really nothing else in this land for us to do so we moved on to the Kingdoms land.

I’m a huge fan of the medieval legos so i thoroughly enjoyed this land. Inside of it you had two small flat rides, Merlin’s Flying Machines and Merlin’s Challenge. Both of which were reasonably fun but if I had to choose only one it would be Merlin’s Flying Machines as this was the more Lego themed ride of the two. There was a small kiddie coaster called Dragon’s Apprentice which was fun to do because they ran you through the ride 3 times without having to get off. A small coaster but fun. I could sadly see that at one point there were trees in the middle of the ride that seemed to have been cut down. I think some trees would have added to the joy of this coaster so hope they are able to replant some trees for future riders.

The last ride of this land was The Dragon which was a fun coaster! The queue for this one is 100% indoors and air conditioned which was a super nice change of pace. The queue itself was so well done. It was made to look like you were entering a medieval castle and they pulled it off quite well! Throughout the queue there were various lego medieval paintings which added to the ambience. If you need a place to cool off, this would be a great building to do it in!

The coaster itself was quite fun but wasn’t operating at 100%. There was a large almost dark ride portion of it in the beginning but almost none of the audio was working properly. I could imagine that with better audio playing through this section that the ride could be so much better. After that dark ride portion, we went on the lift hill and through the track. A solid coaster overall, not a kiddie coaster but not exactly like a type of coaster you might encounter at Six Flags.

Their Builder’s Guild was closed while we visited the park so we’re not entirely sure what was in this building. Maybe it was a fun building area for kids? That’s our best bet as to what it was.

The next land was Imagination. This land had their theater where they played various Lego short films on a staggered basis. They had 4 or 5 shows. Here’s a list of those I remember: City 4d, Ninjago, Lego Movie, Mythica. If you want to see a particular show double check the showtimes for it. Not all their shows played the same number of times. We decided to see Mythica as it was their newest show. It was a cute short show but kind of confusing for us. We were left scratching our heads at parts of it but I think kids would probably enjoy it.

They had a spinning tea cups style of ride in this land that we did as well as a pull rope tower called Kid Power Tower. This tower had a rope that guest could pull to lift their vehicle up to the top of a ride tower. They could then let go of the rope and they would descend to the bottom. For this we were given plastic gloves which made pulling the ropes a lot harder and our hands a lot sweatier.

Last up for Legoland Dubai was the land ‘Adventure’ was by far the funnest part of the park!

This land had 3 amazing rides in it: Lost Kingdom Adventure, Wave Racers, Submarine Adventure. I’ll talk about each of these 3 below. If it was a crowded day, this would probably have been the side of the park we should have started at. All 3 of these rides felt like E ticket attractions for the park while most of the other rides (except for The Dragon) felt like B or C ticket rides. For that reason, if you visit the park be sure to go to the left side from the Miniland hub building.

The first ride we did was the Lost Kingdom Adventure. This was a fun dark ride that had a shooter element to it. Guests could shoot various targets to try and earn a high score. Compared to a lot of other dark ride shooters, this was a fantastic ride. The ride was full of some amazing lego set pieces and we ended up riding this twice because we loved it so much!

Next up was the Submarine Adventure ride. Think of the Nemo ride at Disneyland but themed to Legos. However, this ride actually had a ton of live fish and aquatic life in it! That was actually a really cool surprise. This ride was fantastic. Our only complaint was that as adults, we had to duck down a little to see through the windows of the submarine. The under water Lego sets were amazing and we loved watching the fish swim by. Once again, we loved this ride so much we had to do it twice!

Finally the last ride we did was Wave Racers. They have this type of ride at other parks and we had never done it before. We chalked it up to a corny kids ride but boy were we wrong! This was such a fun ride and I strongly recommend going on it at any theme park if they have it. Whipping around the water and getting a huge wave is so satisfying. Even though it’s a water ride, we didn’t get wet.

Our final thoughts are the park is that it is a fun park to do but at the moment you would only need a couple hours to do it all. If you skipped rides and only did the top 5, you could probably finish the park in under an hour and a half. The park had plenty of expansion pads for the future but at the moment I don’t forsee them ever getting the chance to use them as the crowds simply arn’t here to justify their use. The park is fun and definitely worth a visit. Our recommendation would probably to do Legoland for a few hours in the morning and then use your remaining day at the other nearby park, Bollywood, which is also currently a half day park. We’ll cover more on Bollywood in a future article.

Dollywood Flower and Food Festival – Best and WORST of the Fest!