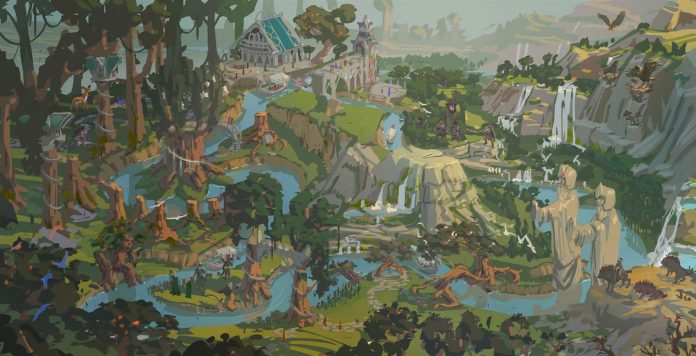 They said a live action movie could never be made of the Lord of the Rings book(The bakshi animated movies were released in 1978). Then the hardcore critics said even if it was made, it would be terrible as the books were just far too detailed and full of lore. Well, the first movie came out and everyone loved it. Followed by a second movie. Finally the third one came out and literally won every category it was nominated for in the Oscars (It won 11 Oscars including Best Picture, Best Adapted Screenplay, and Best Makeup).

With the addition of the Hobbit trilogy and an upcoming Amazon TV series, it’s only a matter of time before the Lord of the Rings gets its own theme-park ride. I have a feeling that it could find it’s way into Universal fourth park in Orlando when it opens. The rights to lotr are currently owned by Tolkien Estate, Ltd(it was recently announced that Amazon had bought the global television rights to The Lord of the Rings). *Warner Brothers does have access to everything in the Hobbit and the Lord of the Rings in regards to filming.

The setting for this ride is Lothlórien, the elven realm. Originally founded by a band of elves that broke off and traveled east of the Misty Mountains. They called themselves the Nandor until eventually they became known as the Silvan Elves. Later on Galadriel contacted this lone group of elves that occupied the space that would eventually become known at Lothlórien. Lady Galadriel and Celeborn took over the rule of this group from Amroth and promised to keep it as a bulwark against Mirkwood’s flank.

As Sauron’s influence increased, the lands around his withered and died. Many fled to evade his influence that seemed to creep into the surrounding land. Galadriel’s ring, one of the three given to the elves(and the most powerful of them), prevented Sauron’s influence from touching the land around her. The only way Lothlórien,could be conquered is if Sauron ventured out himself and claimed the city.

The name Lothlórienmeans “Dream-Flower”. We dreamed up our own version of what a ride would look like. Here is Lothlórien Falls. 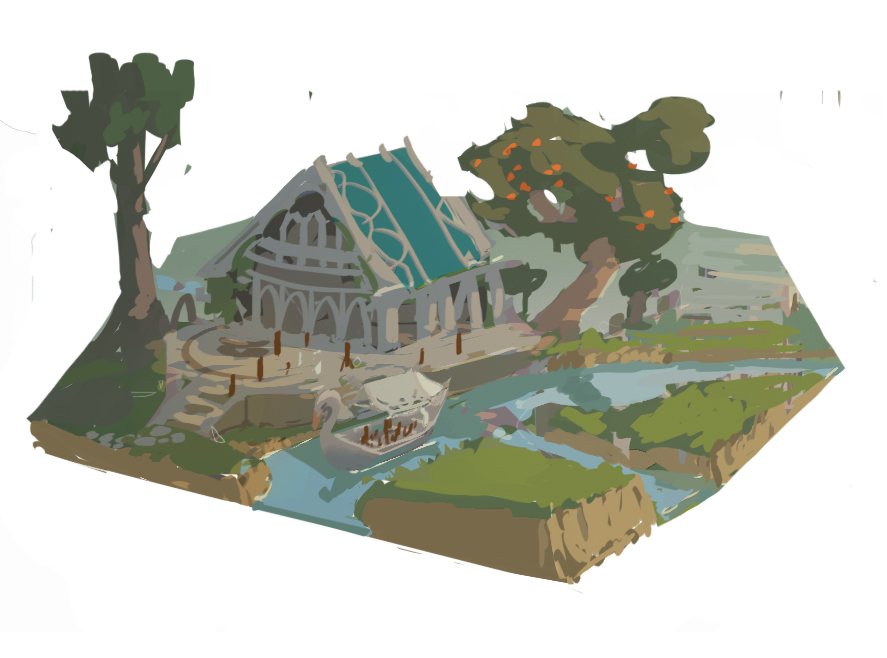 You would start out inside the Elven city. The queue for the ride would feature impressive elven goods and depict various rooms you would find inside a typical elven house. Bows and arrows, musical instruments, weathered looking books, and plenty of plants. There would be huge towering trees surrounding the house. Intricate elven runes would be found on the various buildings and tools found in the house. Guests would embark large swan boats that would hold 15-20 people. An elven tour guide would lead your voyage through the forest. Your elven guide would be garbed in traditional Elven clothing and might have an intricate knife along their side. 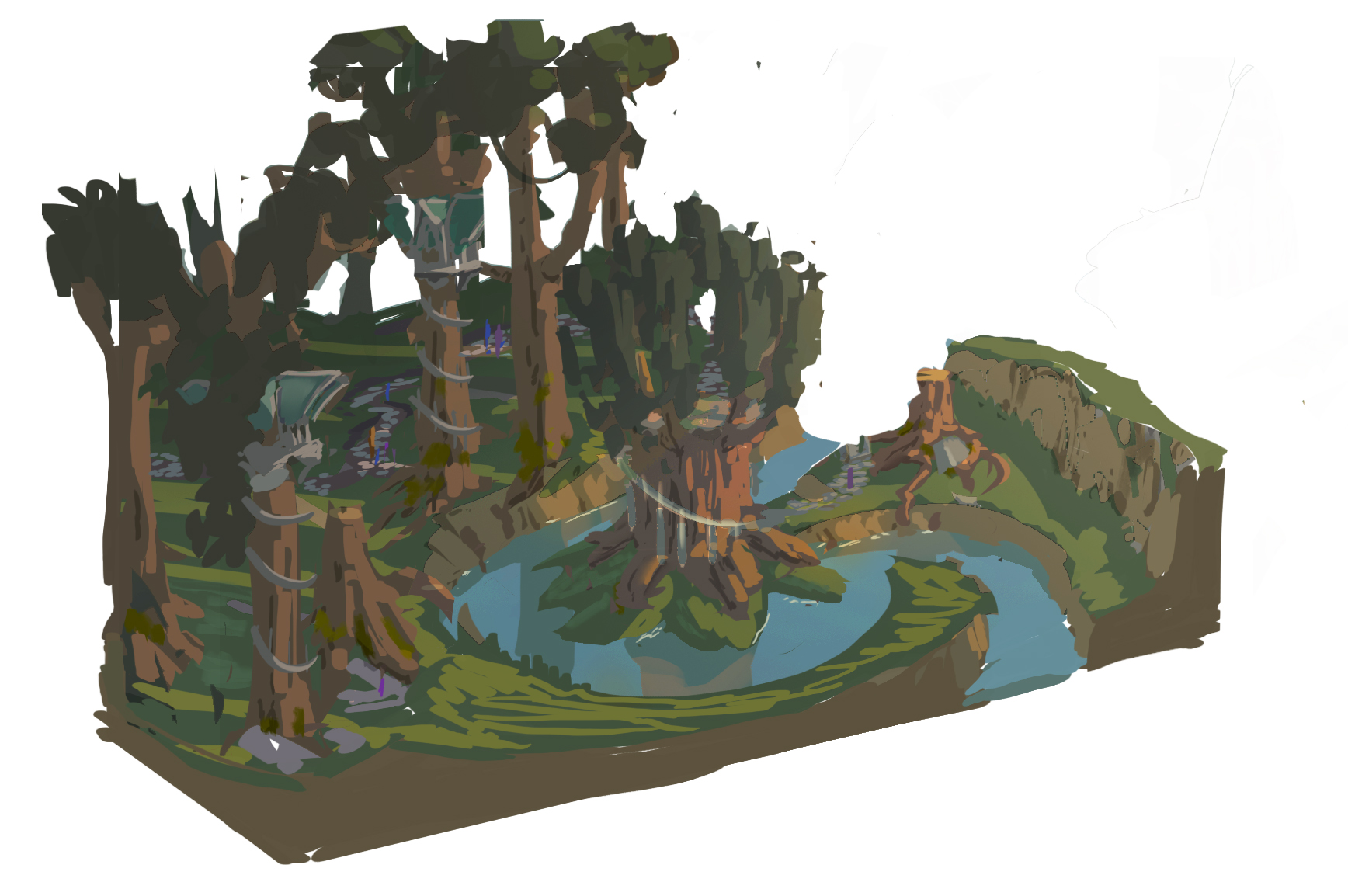 You would continue to pass through the elven city and be amazed as huge trees adorned with elven buildings surround you. The foliage would get very thick. The lights from the elven buildings would astound you with their brilliance and show off the vibrant buildings built in the tree tops. On one tree, there would even be a procession of elves walking up the staircase on it. Your tour guide elf would describe the beauty that is Lothlórien, and say a dwarven city could never match up to it. 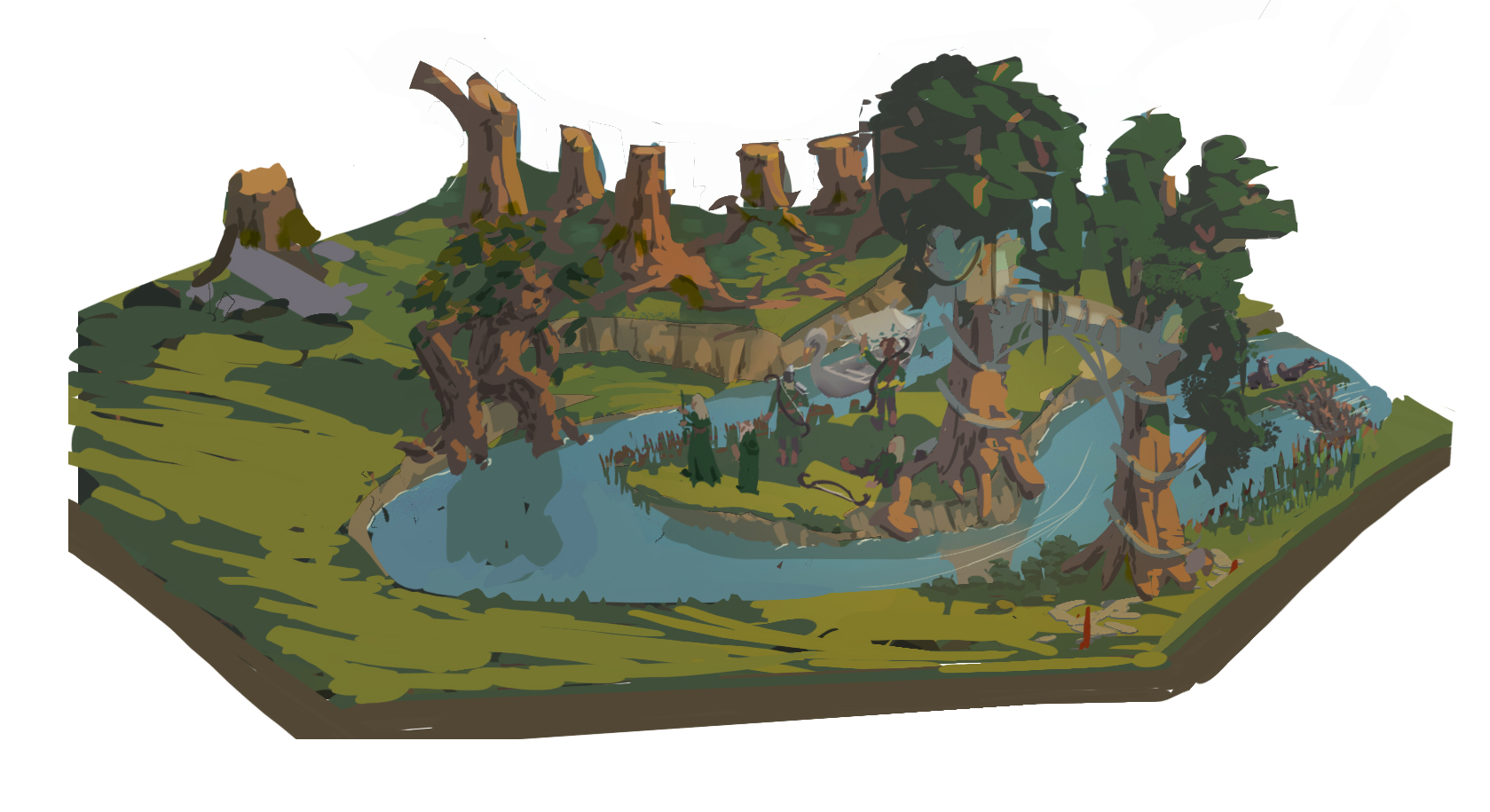 Your journey would continue and you would eventually make your way out of the elven city. A group of traveling elves wave to your boat as it passes by. Some of them have bows and arrows, while other have baskets meant for gathering fruits and nuts. You then see a friendly Ent sitting along the Riverbend. He might say something like “The world is changing: I feel it in the water, I feel it in the earth, and I smell it in the air”. Could this be forewarning as for whats to come? The elven guide makes a joke about ‘how long would it take a dwarf to cross this river? As long as it takes them to build the bridge, since they cant swim!’ 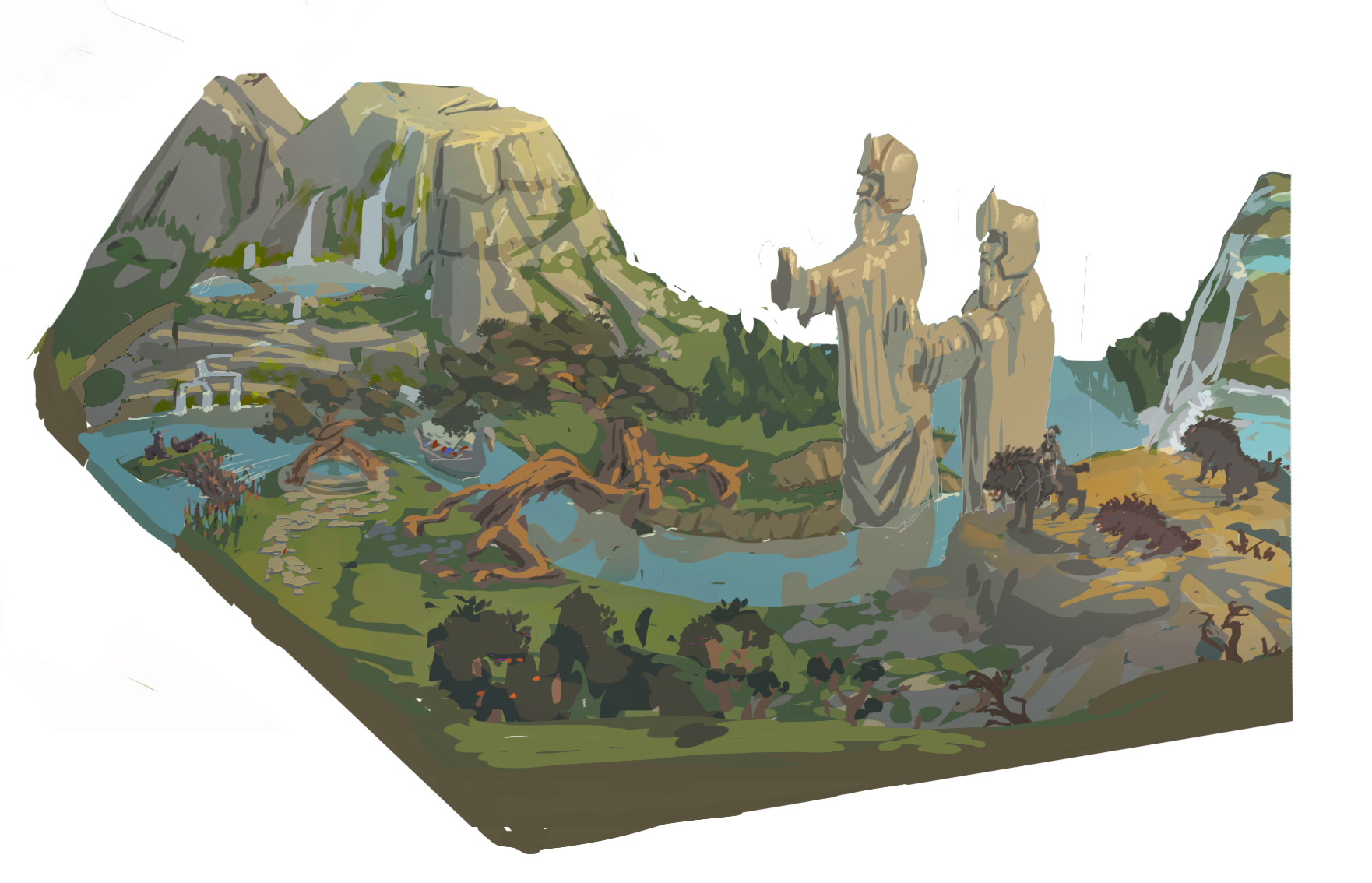 As you continue your journey, you spot some wild deer like animals lining the side of the river eating plants. On the opposite side would be a pair of swans sitting in a lake formed by a beautiful series of waterfalls. You continue on and see the Argonath. Two giant statues carved to look like Isildur and Anárion. They mark the northern border of Gondor. On top of the rocks next to them would be the first signs of trouble for your journey, Warg Riders. Orcs that rode Wargs, a type of giant wolf. They are looking for easy prey and you seem to be fresh meat! Your tour guide would point out at this part that these amazing statues were actually built by man as they couldnt find whatever cave the dwarves were in to help. 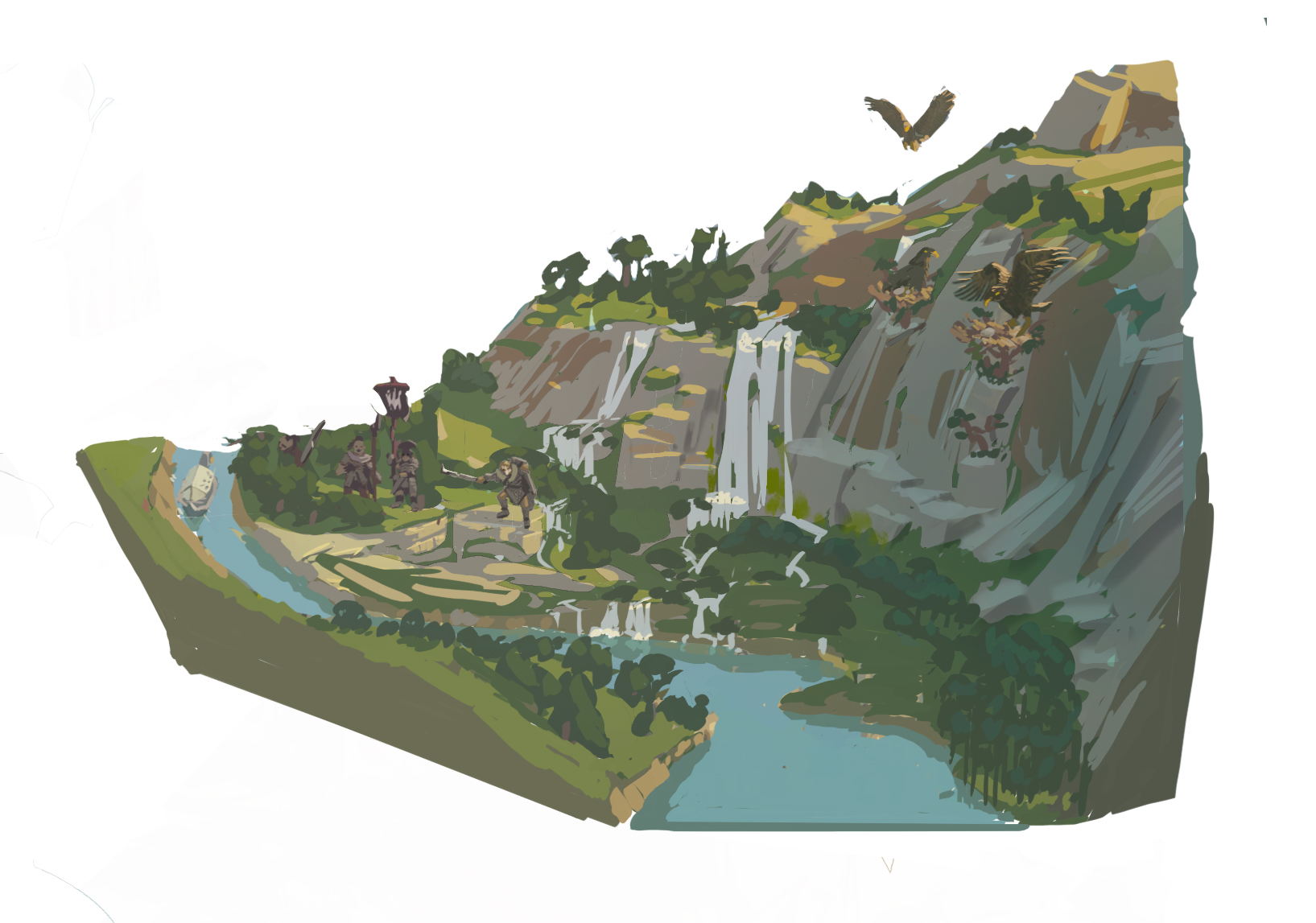 Continuing on as you’re now in Gondor’s realm you see some eagles on a cliff face. These are absolutely huge birds and one appears to be feeding its young. More waterfalls mark your journey along the river although these are not nearly as beautiful as the previous ones found in Lothlórien. Then all of a sudden a pack of Urak-Hai appear along the river bend! They bear Saruman’s white mark and yell battle cries as they look menacingly at you. One of them says ‘Looks like meats back on the menu Boys!’. Your elven guide might  reply with ‘If I was a dwarf I might be afraid of that statement’ 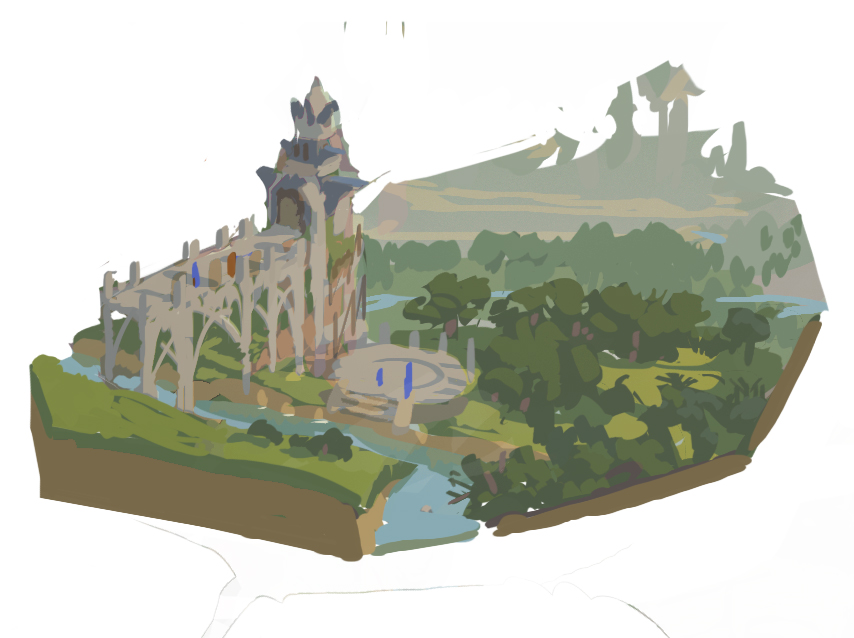 Your journey would end at an old abandoned elven outpost. Part of it would be crumbling. As you leave the vehicle you hear guests might occasionally hear the horn of Gondor summoning all warriors to help defend. Your tour guide might give you one last parting remark ‘If you ever see a dwarf, well you’re obviously looking at the ground level. Har Har!’

This concept art was made possible by your donations! Please support us on Patreon so that we can continue to make beautiful theme park attraction idea’s come to life, CLICK HERE

What’s your favorite part of this ride? or what would you change about it? Comment below! Go on another adventure with us by checking out our UP ride concept idea!

This article was sourced with information from The Tolkienist 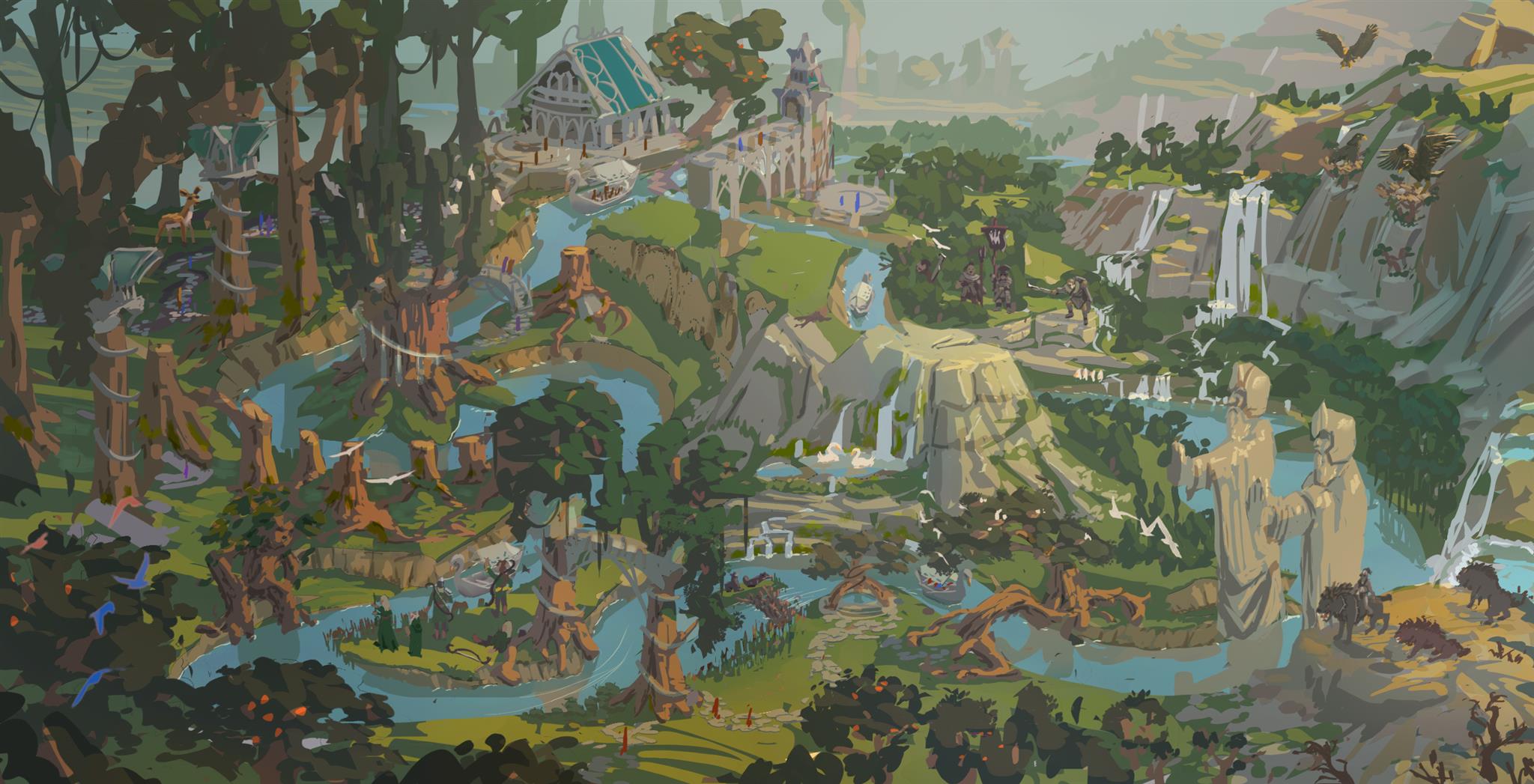 We’re looking for contributors for our blog!