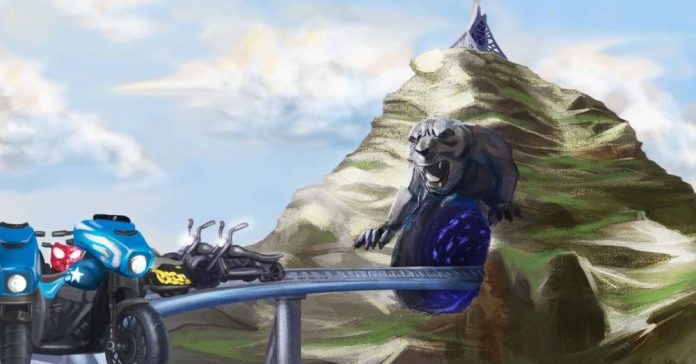 With Star Wars land only a year away from opening, most people seem to have forgotten about the Marvel land that was announced! Currently its set to take over all of Bugs Land.  The teaser poster for the Disneyland’s expansion shows Spiderman, Black Panther, and Doctor Strange. It also shows some of the Guardians of the Galaxy but they already have a ride built so we’re going to skip talking about them.

It’s not up for debate that Black Panther was one of the biggest breakout hits from comic books to the big screen. As of May 22, it grossed 1.3 billion from the box office. That’s huge and one of Disney’s highest earnings for their Marvel movies. So, because of this monumental box office take, I am assuming that it’s going to be the tentpole ride of this new themed land.

Instead of just taking over only Bugs land, I am guessing that Disney will do what they did with Star Wars land and expand out! Below is a map of California Adventure from a satellite view. As you can see there is a huge parking lot just below the Guardians of the Galaxy ride. If Disney wants to make an amazing Marvel themed land, they should use this space for it. The left is the before image and to the right is the land I believe they should use for the new land highlighted in green.

Here’s what I think the new Black Panther ride should be:

Imagine that there is a new mountain on the Disneyland resort. No longer will Grizzly Peak or Cars land be the highest rock looking object in California Adventure. Instead, I imagine a huge hill being made where the parking lot currently is. It’s going to be huge. Probably the same height as the Matterhorn and maybe wider as well. On top will sit the monument building from the Black Panther hill. 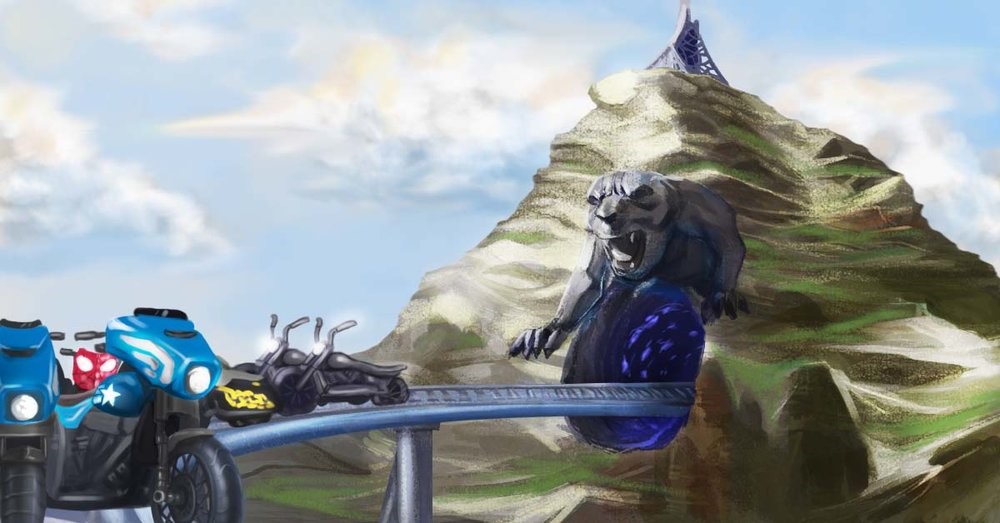 So what is the story behind this new hill? Well, it’s a super hero training academy! (P.S. if you don’t know what the Test Track ride at Epcot, is be sure to check it out to know what I’m talking about below) With inspirations taken from Test Track, you will be able to design your own super hero vehicle that you will fight crime in! At the ground floor of the mountain will be a large computer room, like in Test Track, where everyone gets to design their own hero vehicle. You’ll get to add various parts, tires, and gadgets to your vehicle to try and make it the best!

An alternate version of this is that instead of designing a hero vehicle, you get to make yourself into a superhero. A picture is taken of your face and then you’ll be able to select various hero attributes to add to yourself. Display screens will show your new superhero body and all the amazing powers you’ve given to yourself.

Next, after you’ve designed your vehicle/yourself into the ultimate hero or machine, you will see a video message from the Black Panther himself. He will go into detail about how the world needs more hero’s and you’re so brave for volunteering. Maybe Shuri(his sister) will walk in and point to the audience and say ‘What are Those!’ A camera pointing to the audience would then try and find an audience member wearing flip flops or crocs and display that on the screen.

So the ride vehicle will be something similar to the Tron ride found at Disney Shanghai. You’ll board individualized sections. For this ride, these will look like motorcycles and each one of them will be painted with the colors of various marvel heroes.

After boarding, you’ll go through a series of superhero tests narrated by the Black Panther as he oversees your learning. This part is also inspired from Test Track where they take you through various scenario’s testing your car. You might have to dodge vehicles that are overturned in a road. These would be real vehicles that would be on their side or flipped over that seem to be in your way.

Next, you’ll have to fight off some bad guys. This is when your super hero powers would come into play that you chose earlier. Your vehicle might make a range of noises or glow differently based on what you chose. This section would probably be a screen where the bad guys would attack from all sides of the vehicle. Each side would have their own subsection dedicated to their vehicle, so you could see how your abilities affect the bad guys

The last portion of the ride would be a speed test. There will be some mechanical noises around the vehicle and it might shift up and down. Shuri will then appear from a control booth and say that she just installed the vibranium component to your ride, and that you’re ready for the speed test. You’re able to take one last breath before you’re launched out of this testing cave and into the world!

Below is an image of where the track would take you around the new land. It would be a fast circle that gives you a nice aerial view of what’s going on below!

To make this happen Disney would have to remove the parking lot and possibly some of the buildings with the white roofs to the right of the new ride. Considering what they did to make the new Star Wars land happen, I dont think removing a few of these buildings would be too much harder.

This concept art was made possible by your donations! Please support us on Patreon so that we can continue to make beautiful theme park attraction idea’s come to life, CLICK HERE

Comment below what you think of this ride and if you have idea’s for future ones!

This is just fan made concept art, none of this is officially endorsed by Disney. Map images taken from google.

If you're an avid of all things Disneyland then you might have thought about picking up a book or five about the park. Well, whether you want a single book or our whole list, we've gathered them all in one place to make your life a little easier.
Read more

We created an extensive list of Theme Park Chatrooms. Find your park and join the conversation!

One of the problems we sometimes encounter at parks is not knowing. Whether its not knowing if its busy, our favorite ride...
Read more