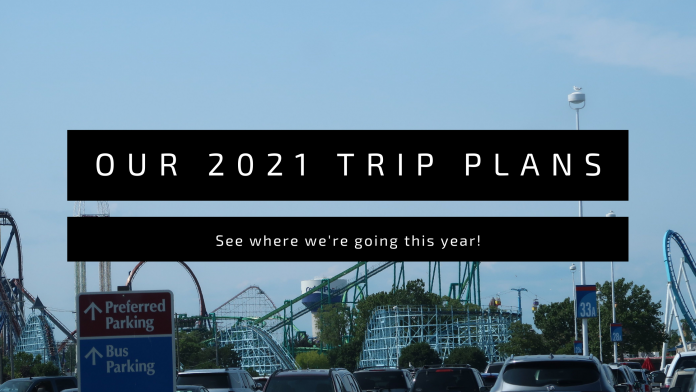 When we used to live on the west coast, our options for weekend trips to theme parks were quite small. Most flights on Southwest simply arrived too late at night on Saturday and departed far too early on Sunday. While we did have some trips, these were usually long week long trips to parks where this timing didn’t matter too much.

But, that has changed! We’re now living just a few minutes outside Disney World and have a lot of possibilities in our future! This year we hope to visit the following theme parks. This list is probably going to be smaller than next year as we’re still getting situated in our new house.

As usual, I hate spoilers so havn’t looked too much into these parks. I know a few snippets about some. Like Kings Dominion has an Eiffel Tower like Kings Island since they were both owned by Paramount at one point. And I know that Nickelodeon Universe is another indoor park like the one at American Dream in New Jersey.

After this summer we will have visited every single Cedar Fair theme park they have. This doesn’t include water parks. I also hope to get at least 75 new coaster credits from these parks and local parks within a 4 hours drive of our house that I have not listed!

Our goal is 2 flights a month. Most of our trips will depart early Saturday and leave late Sunday. I was able to use the points I’ve accumulated on my credit card to get every single plane ticket! It also helps that I was able to earn companion pass last year for my significant other, Crystal. It’s a special deal where Southwest lets your companion fly free.  The cost of flying is around $10 I pay in tax for the flight!

What’s more, we’re saving on hotel costs as each trip usually just requires a 1 night stay! For food costs, we have the dining plan at Cedar Fair and Six Flags parks so that will also save some extra money for trips covering those parks.

Overall, we’re super excited for this year and glad that these parks are able to operate under safe conditions. Follow our journey here on our blog and youtube channel for more trip updates!