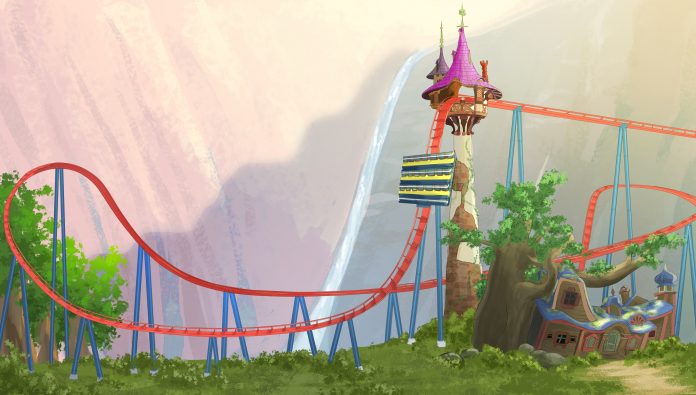 Should Tangled Be The First Dive Coaster At A Disney Park?

We did a collab with Italian Armchair Engineering! Check out their blog here: https://ludpat.blogspot.com They designed this whole ride/blog and we helped them with the final art! Just a reminder, this is a concept both of us just made for fun! It’s not official or rumored to be in the works.

PARK: Imagined for Disney Enchanted Kingdom (made up park) or for another Disney
park.

INTRODUCTION AND IDEA: As you may know, in the future Tokyo DisneySea will
open a new Rapunzel themed area. This reminded me that long ago, when I imagined a
Disney Italian park, Disney Enchanted Kingdom, I also wanted Rapunzel to be there, as it was the latest Disney classic back then (as well
as the 50th, which is a big number!).
After the basic idea I also needed an “execution”. The first thing I thought of was a free
fall tower. But I was not convinced.
The “final” idea was a dive coaster (like Oblivion at Alton Towers), with a maximum
height of 20 meters (we are still in a family park!) just as the princess’s hair’s declared
length.
I know that for so many reasons it would not respect the canons of a Disney attraction,
besides the fact that it would probably be too intense for children and too kid-friendly for
adult thrill seekers, but I decided to invent it anyway.
And now let’s take this journey together!

*** WARNING: if you are not familiar with the film “Tangled” you may have issues
understanding some references ***

QUEUE: we see from outside the Snuggly Duckling pub, which is not only a restaurant,
but also the final part of the line for the attraction RAPUNZEL: ESCAPE FROM THE TOWER. In the distance, a tower can be seen, from which a vertical yellow drop comes
out. Before arriving at the pub we follow a path in a sort of forest with trees covered
with posters of the wanted thief Flynn Rider, always with the nose drawn wrong.

LOADING AREA: the pub, which is also the loading area, resonates with the music of
the film. There are some animatronic pub thugs that play music and occasionally sing.

The attraction attendants (or cast members) also wear similar attire as the thugs and
maybe they will have a little abrupt ways to accommodate you on the cars. Each wagon
has two rows of 4 seats, the one behind a bit higher than the front row. In addition to the
track for loading there is another parallel part of the track, on which occasionally other
vehicles pass with high speed. Let’s go for a ride!

SCENE 1: we leave the pub and enter a short cave communicating with it. Leaving the
cave we find ourselves in a forest, where we slowly follow Flynn Rider / Eugene
(animatronic) while he is fleeing. A wall of leaves opens before us and we enter it to find
ourselves in a hidden clearing.

S2: in front of us we see a tower, we decide to climb (vertical climb on the side of the
tower, not visible from the queue area).

S3: we enter through a window and we discover that Eugene has been tied to a chair by
Rapunzel and she threatens him with a pan (scene with animatronic). Rapunzel proposes
an agreement: she will give Eugene back the crown he had stolen and he will take the
girl to see the lanterns. The thief accepts. The track then rotates on itself at 90 ° to
connect with another part of the track, which comes out of another window. We peek out
of the window. Like Rapunzel we are also hesitant before dropping by 20 meters. The
wagon stops at the beginning of the drop. Rapunzel makes herself (and makes us)
courage and counts out loud “1, 2, 3!”. Then we lower ourselves “using her hair” (the
yellow track would represent the hair).

S4: the drop gives us speed, then we quickly cross a stream (with splashes as we pass)
and we make a parabolic curve close to a hill. With a wide curve we follow the trees that
surround the clearing (passing by Rapunzel that hangs from a tree using her own
hair as a swing while Eugene looks at her amused) and then we go into the forest.

S5: in the forest we cross Maximus the horse’s path, who is hunting Eugene. We decide
to seek for a hideaway at the Snuggly Duckling tavern.

S6: we pass quickly from the loading area (we are on the “other track” we talked about
previously) and we find a secret passage.

S7: the secret passage takes us into a dark cave, in which we travel with great speed until we come to a complete stop. The road is barred. But we also have other problems: water begins to enter from the walls of the cave (you can see the jets projected with mapping). Rapunzel lights up her magical hair (video). While Eugene and Rapunzel begin to move stones, water makes weight on the yielding ground and … BAM! We fall vertically by a few
meters. We got scared, but at least a gap was opened and it allows us to get out of the
flooded cave. Thus we get out, following a drop, to find ourselves again in the forest.

S8: in the forest we make a few turns and some small drops and lifts in a wooded area,
but also with rocky parts (because we are riding by the 7 DWARFS MINE TRAIN). We
ride up to a point where the vegetation becomes particularly dense, creating a kind of
corridor / tunnel at the end of which there seems to be a light …

S9: the vehicle slows down. We find ourselves riding slowly along the shore of a lake (it
looks like an exterior, but it’s an illusion: actually the scene is indoors) where we see
Rapunzel and Eugene on a boat under a sky full of lanterns (while they sing their song “I
see the light”). In the distance we see the Castle of Corona’s kingdom. We leave
Rapunzel and Eugene on their own and follow a path in the forest to go back to the pub.
But wait a minute! Is it just me or is Mother Gothel hiding behind a tree peeking at the
scene elaborating an evil plan? We do not know what happens next because we go back
to the (un) loading area and our adventure ends.

EXIT: still thrilled, we head towards the exit from the unloading area to enter a themed
fast food restaurant (an extension of the pub) from which, thanks to special windows,
you can give a look at the cars passing through the station while eating Southern
Germany-inspired food.

Do you like the idea? Would you be curious to ride it? Would you do it differently? Should Disney have more coasters in their parks? We made another coaster idea based off the Black Panther if you want to check it out.

They said a live action movie could never be made of the Lord of the Rings book(The bakshi animated movies were released in 1978)....
Read more

With Star Wars land only a year away from opening, most people seem to have forgotten about the Marvel land that was announced! Currently...
Read more

Recently, Netflix announced that they would be partnering with Universal and bringing their Stranger Things IP(Intellectual Property) as a haunted house to Halloween Horror...
Read more

Recently there was a Coco ride hoax where rumors swirled around The Haunted Mansion being closed and replaced with a Coco reskin. Obviously there...
Read more