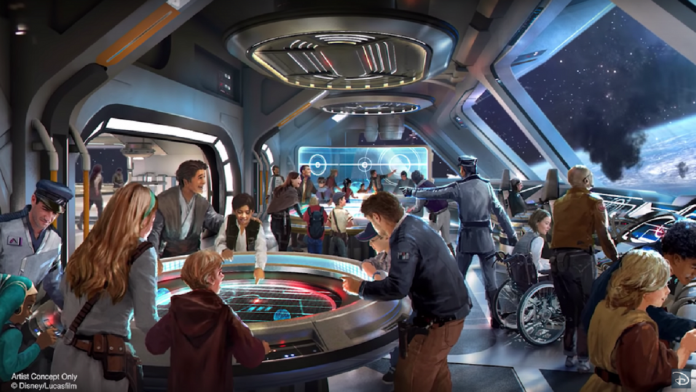 If you have been looking forward to the fully immersive experience of Disney’s Star Wars: Galactic Starcruiser then your wait is over.  March 1, 2022 will be the maiden voyage for this 2 night adventure.  Once booked this adventure will be very much like the experience of a Disney Cruise.  Your booking will include 2 nights onboard, many activities, a specialized dining experience, as well as “port” adventures.  Star Wars: Galactic Starcruiser is a first-of-its-kind vacation that goes light years beyond anything Disney (or anyone else for that matter) has created before.

Upon arrival at the Walt Disney World Resort terminal all guests (passengers) will board a launch pod, which will shuttle them to the Halcyon Starcruiser.  If you have ridden Star War: Rise of the Resistance it will be much like the first part of the ride.  From that point on you will decide how you want become part of this fully immersive Star Wars adventure.  You will be the hero of your own story either as a member of the Resistance, an operative for the New Order, or learn the ways of the Jedi.  You will be able to get as involved as you like or take a more “spectator” role if you desire.  If you have a favorite Star Wars costume you will be encouraged to wear it and if you don’t own one don’t you worry,  Disney will have an onboard store to purchase your princess, smuggler, or Jedi attire.  These decisions are left totally up to you and will actually impact the direction of your trip.

During the entire journey you will interact with a wide variety of characters from the Star Wars universe, some you may even recognize.  You might even be part of a secret plot, learn to fly the great Starcruiser, or learn to wield the Jedi Knights weapon – the lightsaber.  During the trip you will hop on a transport to the surface of Batuu where you will find adventures waiting in Star Wars: Galaxy’s Edge.  During your trip to Batuu you will ride both Rise of the Resistance and Smuggler’s Run as well as explore the outpost from a very different viewpoint.

Your meals will be served in the Crown of Corellia Dining Room.  This room is named for the planet that not only gave us the Halcyon Starcruiser but also the Millennium Falcon.  There will also be featured performers during one of your evening meals.  Something to look forward to for sure.

Reservations are now being booked for this once in a lifetime journey.  Please feel free to reach out to Scott at Starstuff Travel to book your next out of this world adventure at [email protected], And as always – May the Force be with You.