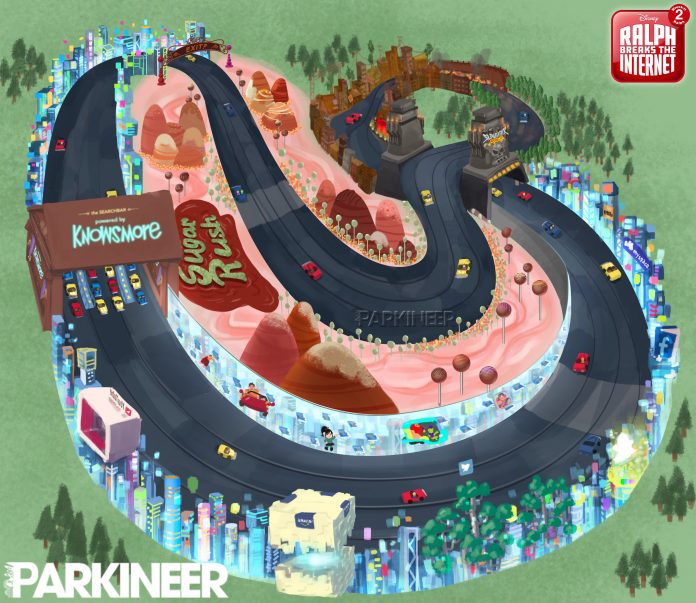 Have you ever wondered what a Wreck It Ralph ride would look like? Well we definitely did! And that’s why we’ve created our own version of the ride just for fun just like we did for Coco.

Whenever we create our own concept art just for fun, we always have to decide what type of ride it will be. Will it be a roller coaster, a dark ride, or something else. The ride type for a Wreck It Ralph ride was an easy choice, it had to be a type of race car track. That’s a huge theme of both movies and without the ability to drive something, guests would probably leave slightly disappointed. Recent construction of the Tomorrowland Speedway at the Magic Kingdom gave us inspiration to make our ride.

Our plan is simple and doesn’t require any additional land which is often hard to come by at the Magic Kingdom. We’re going to convert the Tomorrowland Speedway into a Wreck it Ralph ride! For those of you that have not been to Magic Kingdom in Orlando, FL here is an aerial overlay of the current ride:

By keeping the same track layout, you theoretically don’t have to worry about as many building permits. You also already have the land cleared for what you want to do with it! As a side note, we’re not exactly sure how much of the Tomorrowland speedway is going to be needed for the new Tron coaster. Because of that, we’re assuming that it won’t drastically change the layout of the current ride.

You start off inside Knowsmore, a friendly search engine inside of the internet. The queue would be fully covered from start to finish inside this internet building. Because it rains so often and can get scorching hot under the Florida sun, this will drastically improve the quality of waiting for the ride. Inside of the queue building would be television screens where Knowsmore would pop up and give fake search results or attempt to auto-fill a search result. Guests might be able to interact with these screens with certain words or phrases that Knowsmore would attempt to auto-fill.

There could also be a great my Disney experience game made for the ride queue featuring knowsmore.

After going through the queue, guests will then board their car. These would be updated from the current designs to be a more futuristic looking vehicle. Disney always likes bringing sponsors on board to help front the costs of building an attraction, and this ride would be no exception to this. The ride vehicles could be decked out with various logos, color schemes, or interesting gadgets based on a sponsors needs.

Afterwards, guests will tour the internet! You’ll see towering buildings on your right. These would include various real websites that could include Amazon, Youtube, Facebook, Twitter, etc. Their design could be the same as seen in the second Wreck It Ralph movie when he travels to the internet.

On the left will feature a large curved screen that wraps around the inside portion of the track. Another view of the internet landscape will be projected onto this screen. However, there would also be various flying cars going either way on this screen. In various spots you might be able to interact with Ralph and Vanelope. Ralph might be hanging off a car for dear life or squished inside a tiny car. Vanelope might narrowly avoid hitting guests as she swerves her car away at the last second.

Disney might also be able to incorporate the princesses from the movie into this curved screen. One might be able to see Merida shooting arrows from on top of a floating vehicle. Or Mulan might be practicing her kung-fu skills on the top of a building.

This screen portion could even incorporate the magic bands and have various buildings named after the guests as they drive by. This would be similar to It’s a Small World or Haunted Mansion where guest’s magic bands are scanned and worked into the story of the ride.

Every ride along the curved screen would be different for every vehicle. No vehicle would necessarily have the same experience twice because there could be so many different options to display!

Up next is Slaughter Race and you want to play it! Slaughter Race is an MMORPG game featured in the version of the internet that Ralph visits. Ralph’s original goal in the movie was to steal a super rare car from a boss named Shank. We would be keeping the current bridge in the ride and making a huge upgrade to how it looks.

Guests will enter this game and be greeted by Shank next to her shiny red car. There would be towering and decrepit warehouses and industrial buildings around you. You’ll pass by a couple of fun scenes in this section one of which might include a shark!

Next up guests will see a tunnel filled with cars that they seemingly have to go through just like in the movie. But what’s that, there seems to be a clearing in the buildings. The track becomes filled with dirt and there is a sign that says “This way for secret bonus track”. It appears that Ralph has tried to add his own secret track to Slaughter Race! You continue on through this forest and hear Ralph saying ‘You’re going to love this next part!”

As you go over the hill, you’re greeted with Candy Mountains and Lollipop trees! You’ve magically been transported inside Sugar Rush! Guests will continue on through this colorful and sweet land, all the while racing the other lanes of vehicles around them. Candycorn, chocolate, gum drops, and more will be in this section!

There will be various smell cannons around this portion of the track. Each one giving guests a smell of this sugary land and all the sweets it contains.

As in all video games, you’re sometimes greeted with a message that says “Are you really sure you want to Exit?” Even though you won’t want to exit this Sugar Rush game, you’ll continue on with your journey.

You’re back in the Internet and on the last part of the ride. The Knowsmore building is coming up again. You’ve officially visited the Internet! How cool is that?

Did you want to support us making more of this type of concept art? Check out our Patreon account, CLICK HERE. You can help us decide what rides to work on and what to include in the design!

These images were created by Parkineer for Parkineer, not to be used without express permission given.

P.S. This ride is not endorsed by Disney in any way and was just a fun concept we made.

Here’s what an UP ride could look like if we had our way! Up: Escape From The Zoo Ride

Should Tangled Be The First Dive Coaster At A Disney Park?